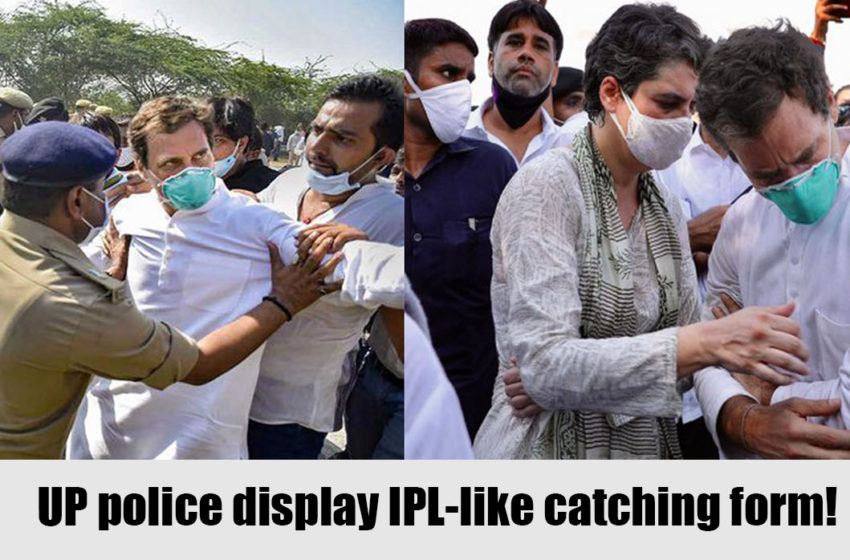 The National Dawn
New Delhi, October 1, 2020
Uttar Pradesh police Thursday arrested Indian National Congress (INC) former president Rahul Gandhi and All-India Congress Committee General Secretary Priyanka Gandhi and other Congress leaders while the group headed to Hathras to the meet with the family of Dalit girl who died following her brutal torture and gang rape.
Rahul Gandhi was push around and in the ensuing melee he fell down, according to reports.
In its Twitter post, Congress said, “The UP police has said Rahul Gandhi has been arrested under Section 188 of the Indian Penal Code (IPC) for violating an order.”
Reacting to the arrest DMK President M K Stalin demanded that Uttar Pradesh Chief Minister Yogi Adityanath apologise for the alleged inhumane treatment meted out to Congress leader Rahul Gandhi by police.
Anarchy and unruliness governs Uttar Pradesh, it appears and not rule of law, he alleged reacting to the crimes against women there and police stopping Congress leaders Rahul Gandhi and Priyanka Gandhi Vadra amid melee.
Bhahujan Samaj Party (BSP) Chief Mayawati deplored the law and order situation in Uttar Pradesh. Replace Adityanath or impose President’s rule in the state, she demanded. Referring to deaths of two women in Hathras and Balrampur regions of the state, she said the incidents are reminiscent of the 2012 Nirbhaya gang rape and murder in Delhi.
Earlier this week on Tuesday, the 19-year-old Dalit girl from Hathras village in Uttar Pradesh, brutally assaulted by four upper-caste men, succumbed to injuries in Delhi’s Safdarjang Hospital.
The incident occurred on September 14 when the girl went to collect animal fodder from a field with her mother. The girl was allegedly gang-raped, and later strangulated and dragged with her dupatta.
Her family had transferred the girl to the hospital in Delhi from Aligarh’s J.N. Medical College Hospital (JNMCH) on Monday.