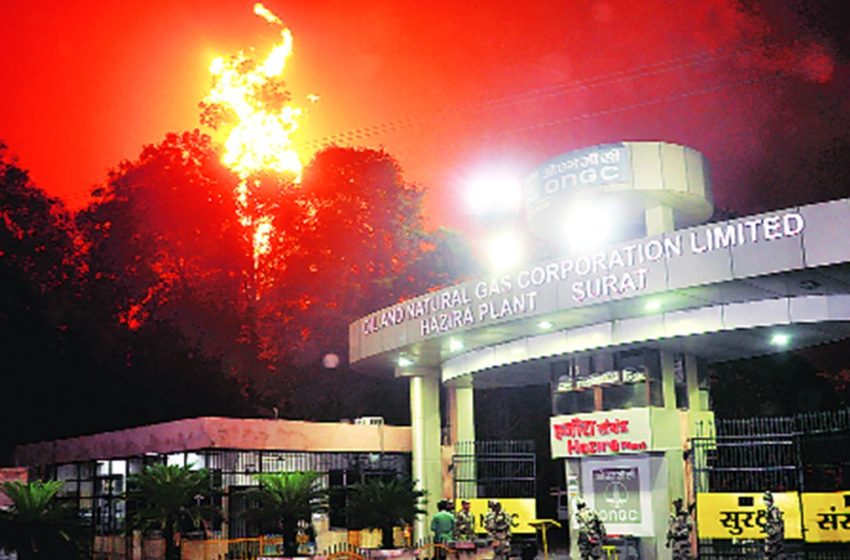 Blasts at the gas terminal of Oil and Natural Gas Corporation Limited plant in Hazira near Surat, Gujarat.

By Sudeep Sonawane
Surat, September 28, 2020
The triple blasts at the gas terminal of the state-owned Oil and Natural Gas Corporation Limited’s plant in Hazira, near Surat, last Thursday, has not affected its share price on Bombay Stock Exchange (BSE) and National Stock Exchange (NSE).
ONGC share went up today to Rs 73.65 before closing at Rs 71.90 (+3%) on BSE and Rs 71.85 (+2.95) on NSE when trading closed on both the bourses on the first day of the week.
Following the three blasts between 3.10 am and 3.30am on September 24, the share dropped by Re 1 from the previous close when trading opened last Thursday.
Moneycontrol website analysts describe the Rs 90,389.31 crore (Rs 903.89 billion) market capitalisation company’s share ‘Very Bearish’. Its profit/earning is a fair 22.45.
Moneycontrol website’s 79% of users, presumably investors, recommend buying ONGC share, 15% say sell and 6% suggest holding it.
ONGC share’s strength lies in Net Profit growth with increasing Profit Margin (quarter-on-quarter) while its weaknesses include Mutual Funds offloading their shareholdings last quarter.
A company source ruled out sabotage saying, “It is just not possible” while speaking to The National Dawn.
In February 2019, the federal government had told ONGC and Oil India to sell out 66 of their small oil and gas fields to private firms. Petroleum Minister Dharmendra Pradhan had said this was part of the government’s new policy to boost domestic production and cut imports.