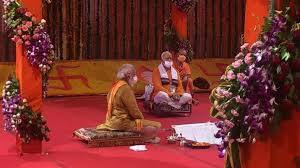 Ayodhya Ram Mandir Bhumi Pujan LIVE Updates: Prime Minister Narendra Modi laid that the first brick of grand Ram Temple in Ayodhya at 12:44pm, as per the ‘muhurat’ of ‘bhoomi pujan’. He was seen performing the ‘pooja’ at ‘Shree Ram Janmabhoomi’ along with UP governor Anandiben Patel and RSS chief Mohan Bhagwat. Several top names like CM Yogi Adityanath and Yoga guru Ramdev are present at the venue as they hailed the day as ‘historic’. Before the stone laying ceremony, PM Modi stopped at Hanumangarhi Temple for ‘darshan’, following which he arrived at the Ram Mandir site and was seen taking part in ‘darshan’ of ‘Bhagwan Shree Ramlala Virajman’.

Ahead of the ‘bhoomi pujan’, West Bengal Chief Minister posted a message on ‘brotherhood’. “Hindu Muslim Sikh Isaai, Aapas mein hain Bhai Bhai! Mera Bharat Mahaan, Mahaan Hamara Hindustan. Our country has always upheld the age-old legacy of unity in diversity, and we must preserve this to our last breath! (sic),” she wrote. Her tweet comes amid flurry of ‘Jai Shree Ram’ chants on the micro-blogging site. PM Modi along with CM Adityanath and 175 people who figure in a select guest list of seers and politicians will attend the ceremony. Meanwhile, Shiv Sena has posted a controversial advertisement in today’s ‘Saamana’ with picture of Babri Masjid demolition with Balasaheb Thackeray’s statement: “I am proud of those who did this”.

Police barricades, yellow banners, walls with a fresh coat of paint and the sounds of ‘bhajan’ mark parts of Ayodhya as the city awaits the laying of first brick of the Ram temple.

Modi will also plant a Parijat (Indian night jasmine) sapling and then perform the ‘bhoomi pujan’. He will unveil a plaque to mark the laying of foundation stone and also release a commemorative postage stamp on ‘Shree Ram Janmabhoomi Mandir’.

Uttar Pradesh Chief Minister Yogi Aditynath’s official residence at 5 Kalidas Marg in Lucknow was fully illuminated on Tuesday on the eve of the temple. Apart from scores of diyas, ‘rangoli’ made with flowers added colour to the residence.

Since Monday, Ayodhya has been illuminated in varied colours in “Diwali-like celebrations”.

As the sun set on the horizons of Ayodhya in the backdrop of the Saryu river, people from different walks of life lit earthen lamps to celebrate their “moment of joy” on Tuesday. As the evening progressed, Ram bhajans echoed at virtually each and every street of the temple town and earthen lamps lined the streets from Naya Ghat and Ram ki Paidhi to Hanumangarhi.

Other parts of the temple town such as Karsewakpuram, Nayaghat, and areas in and around Hanumangarhi were illuminated, with gates having huge pictures of lord Ram becoming one of the most favourite selfie points for youngsters. The routine evening aartis in different temples of Ayodhya were also held amidst rendition of bhajans, blowing of conch shells as eunuchs gathered at some temples of the city to participate in the programme.

Concerned over the spread of coronavirus, authorities in Ayodhya are encouraging others not to come to the temple town, asking them to mark the occasion by celebrating at their homes.

Roads leading to Ayodhya display hoardings with the picture of the proposed Ram temple and of Ram Lalla, the infant Ram, the deity now housed in a makeshift temple. Around the town’s Hanumangarhi area — named after a well-known temple which Modi will visit on Wednesday — both police sirens and ‘bhajans’ in praise of Ram are heard.

Most of the shops in the locality wear a new look, with their fronts painted in bright yellow. A large number of policemen were deployed there on Tuesday. Roads leading into the area are barricaded.

On Tuesday, security checks had begun on vehicles heading to Ayodhya from adjoining Barabanki district on the Lucknow-Ayodhya road. Policemen were taking down details, including mobile numbers of travellers.

Senior Superintendent of Police Deepak Kumar said the focus of the force is on maintaining the Covid-19 protocol. “So we are not going to allow any outsider to enter Ayodhya city,” he said.