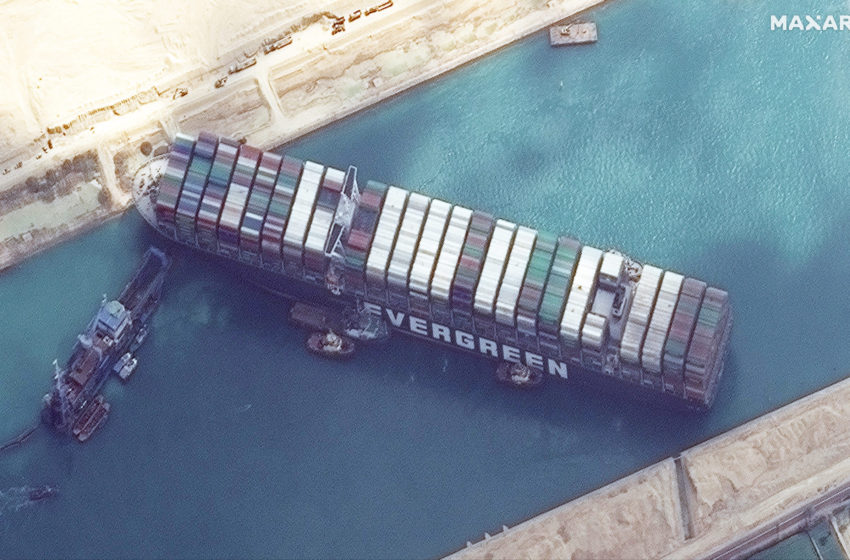 The MV Ever Given, which is longer than four football fields, has been wedged diagonally across the span of the canal since Tuesday, blocking the waterway in both directions

A megaship blocking Egypt’s Suez Canal could be refloated as early as Saturday, the vessel’s Japanese owner told local media, as the crisis forced companies to re-route services from the vital shipping lane around Africa. The MV Ever Given, which is longer than four football fields, has been wedged diagonally across the span of the canal since Tuesday, blocking the waterway in both directions.

At a press conference in Japan Friday the president of Shoei Kisen — which owns the ship — told local media there were no signs of damage to its engines and various instruments. “The ship is not taking water. There is no problem with its rudders and propellers. Once it refloats, it should be able to operate,” Yukito Higaki said in the western city of Imabari, according to the Asahi Shimbun.

Work crews were hoping to remove the ship as early as Saturday evening Tokyo time, he said. “We are continuing work to remove sediment as of now, with additional dredging tools,” Higaki said. The blockage has caused a huge traffic jam for more than 200 ships at both ends of the 193-kilometre (120-mile) long canal and major delays in the delivery of oil and other products.

Bernhard Schulte Shipmanagement (BSM) — the ship’s technical manager — said Friday that an attempt to refloat the vessel had failed. “The focus is now on dredging to remove sand and mud from around the port side of the vessel’s bow,” the firm said.

Smit Salvage, a Dutch firm that has worked on some of the most famous wrecks of recent years, confirmed there would be “two additional tugs” arriving by Sunday to assist, it added. There had been “no reports of pollution or cargo damage and initial investigations rule out any mechanical or engine failure as a cause of the grounding.”

Crews had been seen working through the night, using a large dredging machine under floodlights. But the vessel with gross tonnage of 219,000 and deadweight of 199,000 has yet to budge, forcing global shipping giant Maersk and Germany’s Hapag-Lloyd to look into re-routing around the southern tip of Africa.

‘Human error’?
“Shipping companies are being forced to confront the spectre of taking the far longer route around the Cape of Good Hope to get to Europe or the east coast of North America,” said Lloyd’s List, a shipping data and news company. “The first container ship to do this is Evergreen’s Ever Greet… a sistership to Ever Given,” it said, noting that the route can take up to an additional 12 days.

Egypt’s Suez Canal Authority said the megaship veered off course and ran aground when winds reaching 40 knots whipped up a sandstorm that affected visibility. Lloyd’s List said data indicated 213 vessels were now stalled at either end of the canal, which links the Mediterranean and the Red Sea. The blockage was holding up an estimated $9.6 billion worth of cargo each day between Asia and Europe, it said. “Rough calculations suggest westbound traffic is worth around $5.1 billion daily while eastbound traffic is worth $4.5 billion.”

‘The stakes are too high’
The canal authority has said between 15,000 and 20,000 cubic metres of sand would have to be removed in order to reach a depth of 12-16 metres and refloat the ship.

If those efforts fail, salvage teams will look to unload some of the Ever Given’s cargo and take advantage of a spring high tide due to start on Sunday night to move the vessel. Plamen Natzkoff, an expert at VesselsValue, said teams would likely throw even more resources behind their efforts in coming days to make the most of that opportunity. “If they don’t manage to dislodge it during that high tide, the next high tide is not there for another couple of weeks, and that becomes problematic,” he said.

“The stakes are too high for it to take months.” Turkey on Friday offered to send a tugboat to help Egypt free the Panama-flagged vessel, as it pressed on with its bid to mend ties with regional rivals. The United States also said it was ready to send support, including a team of US Navy experts.