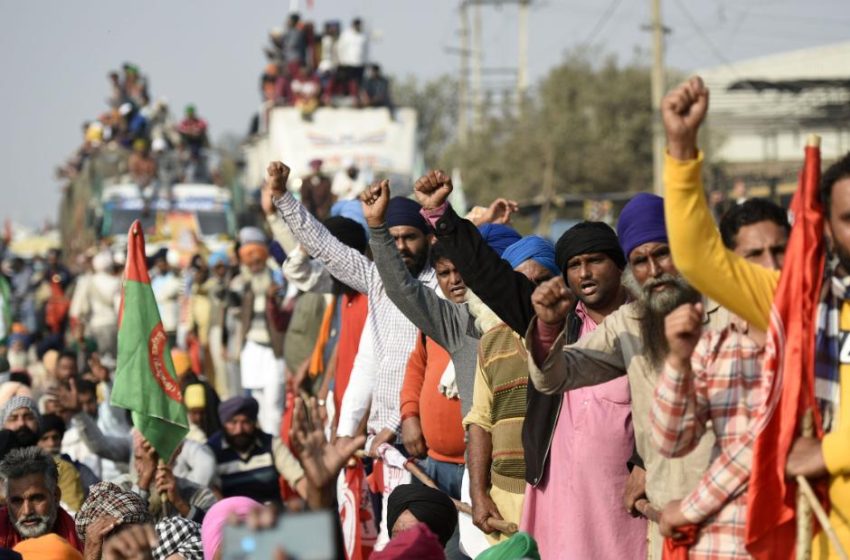 Internet services in the Delhi border areas of Singhu, Ghazipur and Tikri – epicentres of the farmers’ weeks-long protest against the centre’s agriculture laws – will be suspended from 11 pm for a period of 24 hours, the Union Home Ministry said in a notification issued Saturday afternoon.

“… it is necessary and expedient to order the temporary suspension of internet services in the areas of Singhu, Ghazipur and Tikri, and their adjoining areas in the NCT of Delhi from 11 pm on January 29 to 11 pm on January 31,” the ministry notification said.

The Haryana government had on Friday suspended mobile internet services in 17 districts till 5 pm.

Lakhs of farmers across India have spent the last several weeks demanding the centre repeal laws they say will leave them at the mercy of large corporate firms.

The tense situation exploded on Republic Day when groups of farmers and others clashed with police during a tractor rally that turned violent. Police had to resort to firing tear gas and lathi charges to control the situation. One farmer died and hundreds of cops were injured.

Following Tuesday’s violence the Uttar Pradesh government ordered the removal of protesters from Ghazipur – which lies on the Delhi-UP border. They were ordered to leave by Thursday night..

However, they refused to budge, with farmer leader Rakesh Tikait claiming he was “ready to face bullets” if needed. The farmers also accused the state of acting in a “dictatorial” manner, and warned the Yogi Adityanath government that thousands were on their way to join the protest.

“The Supreme Court has justified the peaceful sit-in,” Mr Tikait said, adding, “There has been no violence on the Ghazipur border… despite this government is adopting a repressive policy.”

“Thousands of farmers are reaching Ghazipur… If the government thinks they can oppress us, then they are wrong,” the Kisan Andolan Committee spokesperson told news agency ANI.

The UP administration had also temporary cut off power and water supply to the hundreds of farmers at Ghazipur, who have been camping out on the roads.

The two other protest sites – Singhu and Tikri (both on the Haryana border) were also placed under heavy security, with police digging up roads at all three sites to stop farmers from going further.

At Singhu, access to the main protest site was cut off, with security personnel conducting mock security drills. Police sources called it a routine measure and suggested action would only be taken after the farmer leaders respond to notices sent over Tuesday’s violence.

CommentsThe Samyukta Kisan Morcha – an umbrella body of farmer unions protesting the farm laws – said: “We will not be intimidated by the notices by Delhi Police and will respond to the same.”

Right to protest can not be anytime,...