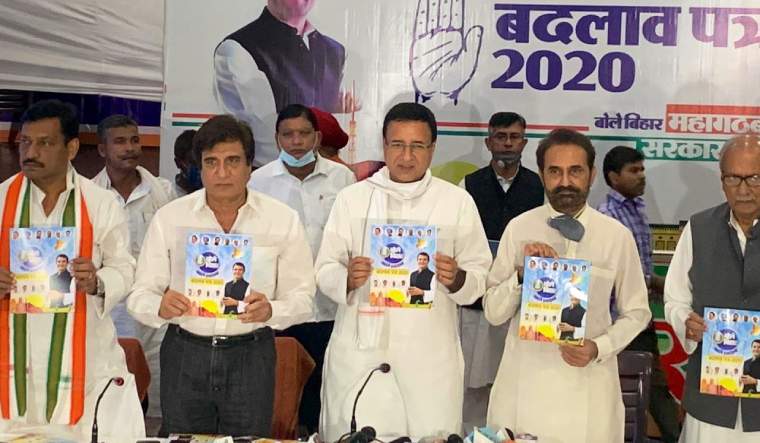 The Congress party on Wednesday released its manifesto for the upcoming three-phased Bihar Assembly Polls.

Referred to as “Badlav Patr”, Congress leader Randeep Surjewala, All India Congress Committee (AICC) Bihar in-charge Shakti Sinh Gohil, presented manifesto of the party that promises loan waiver for farmers and providing 50 percent subsidy in electricity bill to the farmers upto 100 Units. The manifesto also promised that it will reject the Centre’s farm laws if voted to power.

Congress said its manifesto is focussed on farmers and promised to repeal the recently enacted agricultural laws like the Government of Punjab, financial assistance to farmers who cultivate up to 2 acres under the Rajiv Gandhi Krishi Nyaya Yojna.

“Our ”Badlav Patra” talks about loan waiver, electricity bill waiver and increasing irrigation facilities for farmers. If our government comes to power in Bihar, we’ll reject NDA govt’s Farm Laws by bringing separate state Farm Bills as we did in Punjab,” Shaktisinh Gohil said during the launch of manifesto.

The party has also emphasized that its manifesto ensures employment for youth including ₹ 1500 monthly allowance to the unemployed. It has also promised the restoration of 2.42 lakh teacher posts in 18 months.

Earlier, the Mahagathbandhan alliance in Bihar -the Rashtriya Janata Dal (RJD), Congress, and Left parties released its poll manifesto for the assembly election and promised 10 lakh jobs in the first cabinet meeting if elected to power.

In the 20 point manifesto of the Congress, free education for girls up to masters degree, Scooty for girl students scoring 90 per cent marks in class 12th. The Party has also tried to play a regional card by Promising Maithili language to be included in the compulsory subject school syllabus.

Importantly Mazdoor Information Center in all states capital has also been promised to allure migrant labourers, who had been a major sufferer during the lockdown.

Congress, CPI, CPM are part of the grand alliance under the leadership of Rashtriya Janata Dal (RJD).

Bihar with 243 assembly seats will go to polls in three phases: October 28, November 3 and November 7. The results will be declared on November 10.