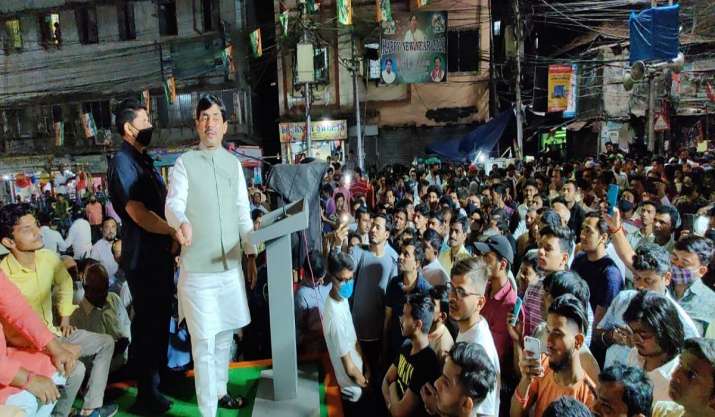 BJP leader Shahnawaz Hussain alleged that stones were pelted at him in Howrah on Tuesday night when he was campaigning for the West Bengal assembly election.

The BJP leader posted on social media a video in which he was seen showing two stones to the officer on duty and blaming the TMC for the alleged incident. “TMC workers pelted stones on me while I was addressing a meeting at Muzzafar Chowk,” Hussain tweeted, saying he was safe and the party workers had lodged a complaint.

“It’s clear that TMC knew it is losing and hence is becoming desperate,” Hussain said. “I myself went to the Golabari Police Station & asked them why police personnel were not deployed according to my Y + CRPF cover security protocol. Strangely, they had no answers for that.”

In his complaint, Umesh Rai, the BJP candidate from Howrah North, named few persons behind the attack, alleging they were all known TMC men in the area. Police confirmed the lodging of the FIR and visit of Hussain to the station, adding that the alleged incident was being investigated.

The TMC denied any involvement of its workers and said the BJP was staging a “drama” to get attention as the roadshows and meetings of the saffron party were “failing” to draw crowds. Earlier on Sunday, a roadshow attended by Hussain and Domjur assembly candidate Rajib Banerjee was stopped by police at Bankra area on the ground that there was no earlier permission.

Both Banerjee and Hussain had protested the action of police. Action will be taken against those who were involved in assault on candidates in some constituencies during the third phase of assembly elections in West Bengal on Tuesday, Chief Electoral Officer Ariz Aftab said. Aftab said his office has received a total of 1,802 complaints during the day and arrested 11 people for their alleged involvement in the attacks on candidates.

“Polling was more less peaceful barring some sporadic violence. There have been some incidents of assault on candidates and we have sought reports. Action will be taken against those who are found guilty,” he said. In the third of the eight-phase elections, 31 constituencies went to polls in three districts Howrah (Part 1), Hooghly (Part 1) and South 24 Parganas (Part 2).

The Election Commission has also suspended four officials in connection with the recovery of three Electronic Voting Machines (EVMs) and four Voter Verifiable Paper Audit Trails (VVPATs) from the house of an alleged TMC leader in Tulsiberia in Uluberia Uttar (SC) assembly constituency, the CEO said.

He said three home guards who were on duty there have been demobilised. Though the seals of the EVMs and VVPATs were “intact”, the machines will not be used any further, he said.Referring to the assault on Trinamool Congress candidates Sujata Mondal, Nimal Maji and Najmul Karim as well as BJP candidates Papiya Adhikary and Swapan Dasgupta, Aftab said, “Necessary and prompt action have been taken and investigation is underway”. ADG (Law and Order) Jag Mohan said video footages are being probed and those found guilty will be treated as per the law.